130th Anniversary of the 48th Highlanders

The connection between The St. Andrew’s Society and the 48th Highlanders dates back to the late 1800s. The Society and a number of other Scottish-Canadian organizations came together to raise funds and lobby for the creation of a Highland Regiment. Despite initial government resistance, the group persisted and Ontario’s first kilted regiment was born.

The 48th Highlanders were officially authorized as an infantry battalion on October 16, 1891. The Davidson tartan was selected in honour of its first Commanding Officer John Irvine Davidson. A falcon’s head from Davidson’s family crest was also incorporated into the distinctive regimental badges.

The regiment’s motto is Dileas Gu Brath which is Gaelic for Faithful Forever. Since its inception, the regiment has lived up to those words both at home and abroad. The 48th has earned 50 battle honours in conflicts around the globe including Afghanistan, the Boer War and both World Wars. 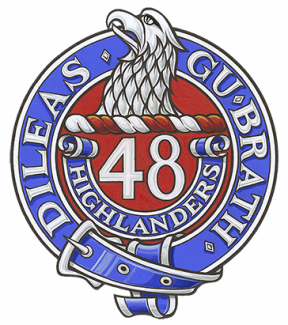 The 48th Highlanders have a longstanding tradition of contributing to Toronto. Whenever the city needs help or people need protecting, the battalion have answered the call. This includes the recent COVID-19 pandemic where soldiers from the 48th worked to support senior citizens in retirement communities.

The regiment’s Pipes & Drums have played at almost every Toronto Maple Leafs’ home opener since 1931. The strike shortened lockout year of 2004-05 was the only one that was missed.

During the First World War, society members donated time and money to help wounded servicemen. In modern times, many society functions take place at the Moss Park Armoury, the home of the 48th Highlanders. The facility is built on the grounds of the former estate of the first president of the St. Andrew’s Society, William Allan. Moss Park was named for his childhood home in Scotland.

We look forward to many more years of working with the 48th Highlanders. To learn more about the regiment, please visit their website.

Urquhart Castle sits beside Loch Ness in the Highlands of Scotland. Founded in the 13th century, Urquhart played a role in the Wars of Scottish Independence in the 14th century. Urquhart was partially destroyed in 1692 to prevent its use by Jacobite forces, and subsequently decayed. In the 20th century it was placed in state care as a scheduled monument and opened to the public: it is now one of the most-visited castles in Scotland.