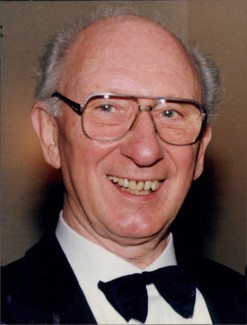 Iain died peacefully in his sleep on April 24, 2016 at Carefree Lodge. He is survived by his beloved wife of 55 years, Cathie, as well family in Canada and Scotland. Born in Scalpay, Scotland on September 30, 1925, Iain followed his heart to Canada where he married Cathie MacVicar on July 30, 1960.

A native Gaelic speaker and expert Scottish Country Dancer, Iain devoted himself to promoting the culture of his native country in Toronto. He taught the Calvin social group of the RSCDS Toronto Branch for 22 years. Known as a meticulous adjudicator and teacher, Iain was in demand as a teacher of Scottish Country Dancing throughout Canada and the United States. He became Chairman of the Toronto Branch of the RSCDS from 1963 to1965. Iain also served as Chairman of Mod Ontario, an organization dedicated to promoting Scottish Gaelic music and literature. From 1983-1985, Iain was

President of The St. Andrew’s Society of Toronto (est. 1836), a charitable and cultural organization best known for the St Andrew’s Ball held every November. Iain’s business career was as a manager with the Guardian Insurance Company. In retirement he volunteered for many years at St. Michael’s Hospital as well as for Meals on Wheels. A generous and caring man, Iain’s kindness and Scots practicality made him a friend and support to many.

Cremation and a private interment have taken place. A memorial service will be held at Leaside United Church, 822 Millwood Road, on Thursday May 12, 2016 at 10:30 a.m.

Donations may be made in Iain’s memory to the St. Andrew’s Society of Toronto. 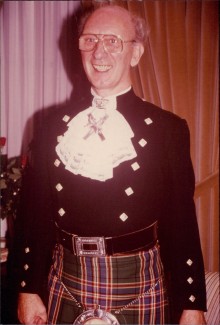