The singing of Auld Lang Syne is synonymous with New Year’s Eve celebrations around the world. But how did an old Scottish folk song become so popular? It may surprise you to learn that its rise to global fame was spearheaded by a big band from Canada.

You’re definitely not alone if you have ever mumbled your way through the words on New Year’s Eve. Auld Lang Syne has been described as “the most famous song that nobody knows”. One of the main reasons for the confusion is that the lyrics are not in English but Scots, a similar but distinct language. Scots is recognized as an indigenous language in Scotland where roughly 30% of the population speaks it. Most importantly for this article, Scots was used by poet Robert Burns when he put Auld Lang Syne to paper in the 18th century. Here is the song performed in its original language by Scottish folk singer Iona Fyfe.

Burns is widely recognized as the author of Auld Lang Syne but that is not completely accurate. When the composition was submitted to the Scots Musical Museum in 1788, Burns noted that he had collected many of the verses. “The following song, an old song, of the olden times, and which has never been in print until I took it down from an old man.” 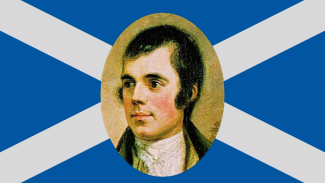 The spirit of Auld Lang Syne most accurately translates to “for old times’ sake”. It looks back fondly on memories made and encourages the listener not to forget old friends. This sentiment saw it originally performed on birthdays, anniversaries and even funerals. The tradition of also singing it on New Year’s Eve became popular in Scotland and spread to the surrounding region. When immigrants from the British Isles began coming to North America, they brought the song with them. In Canada, it would find one of its greatest champions.

Guy Lombardo was a first-generation Canadian of Italian ancestry. The future star was born into a musical family in 1902 in London, Ontario. His father was an amateur singer. Four of the five Lombardo boys learned to play instruments so they could back their father’s performances. But the boys wouldn’t be background players for long.

The brothers started an orchestra while in primary school and practiced in the back of the family’s tailor shop. The group cut their teeth playing shows on the regional circuit around London. As their popularity grew, musicians from outside the family were added. One of the local shows they were booked to play was a short trip from London in Glencoe, Ontario. Upon learning there would be many people of Scottish heritage in attendance, the band learned a new song – Auld Lang Syne.

Guy started in the family act as a violinist but worked his way up to orchestra leader. Eventually, the group crossed over the border into the much larger market of the United States. Their agent believed a gimmick would help them get shows in the ultra-competitive touring scene of the American Midwest. He suggested they celebrate their country of origin by wearing Mountie uniforms as a tribute to the widely known Royal Canadian Mounted Police (RCMP). The band rejected the idea but did change their name to Guy Lombardo and His Royal Canadians. 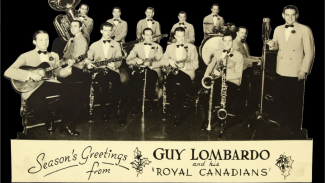 The move to America kickstarted an incredible career. Although they had their detractors, those voices were drowned out by their legion of admirers. The Chicago Tribune once described the band as having ‘the sweetest music this side of Heaven’. Musical icons of the time like Louis Armstrong and Ella Fitzgerald were counted among their fans.

What is probably most impressive about the band was their incredible longevity. They released a hit song every year between 1929 and 1952 including 21 chart toppers. After stints in Cleveland and Chicago, they moved to New York City where they regularly played marquee events like opening day at Yankee Stadium and the Macy’s Thanksgiving Day Parade. The Royal Canadians sold more than 100 million records and played every Presidential inaugural ball from Franklin Roosevelt in 1933 to Jimmy Carter in 1976. Here’s a video of them performing in the 1950s.

The group were radio superstars and had their own show. The song they had learned many years earlier for that performance in Glencoe was frequently on the playlist. When asked about why the band had such affection for Auld Lang Syne, Lombardo revealed a surprisingly simple commercial connection. He had been encouraged to move the band to New York to appear on a radio series sponsored by Robert Burns Cigars. “Seeing that Robert Burns wrote Auld Lang Syne, we incorporated that into our program.”

Despite all their accomplishments, it would be the half-century of New Year’s Eve shows that cemented the legacy of Guy Lombardo and His Royal Canadians. The band’s first New Year’s Eve radio broadcast was in 1928 with their breakthrough coming the following year. In 1929, their performance came from New York’s Waldorf Astoria Hotel for the first time. Their rendition of Auld Lang Syne resonated strongly with listeners following the stock market crash in the fall of that year. People across the United States and beyond reminisced over “the good old days” as the economy soured and The Great Depression of the 1930s began. Roughly 150 years after Burns had submitted the song to the Scots Musical Museum, it became the signature track of a big band from Canada.

From 1929 until 1976, the masses tuned in to hear them play it as one year ended and another began. The tradition eventually transitioned from radio to television where the band became a New Year’s staple for two decades on CBS. The show included live segments from Times Square with Auld Lang Syne being played at the stroke of midnight. 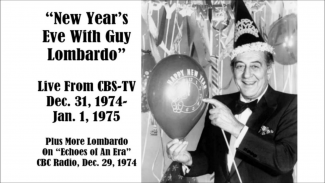 Performing in New York City solidified their fame. As one of the most culturally influential cities in the world, The Big Apple’s traditions were the touchstone for millions of people in North America and beyond. Guy rose to stardom and became known as “Mr. New Year’s Eve”. He was added to the Hollywood Walk of Fame and Canada issued a postage stamp with his image. From a modest start practicing in his father’s shop, American Presidents would call in to wish him well on “Lombardo’s Day”. 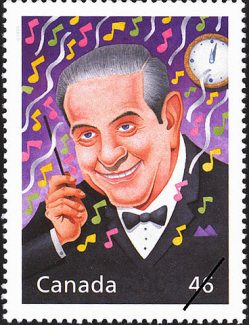 Time eventually caught up with Guy and the band he fronted. In the early 1970s, Dick Clark’s “New Year’s Rockin’ Eve” debuted. Clark’s focus on more contemporary music gave the show an edge with younger viewers who were less keen on the big band numbers of The Royal Canadians. But even as their star began to fade, the band’s older fans still tuned in every year to see them.

Guy performed right up till the end of his life including New Year’s Eve in 1976. He died in 1977 after complications from surgery at the age of 75. Tributes poured in from all over the world at the passing of a legend. Variety Magazine saluted him as “the only Canadian ever to create an American tradition.” As a testament to the band’s legacy, Auld Lang Syne is still the first song played in Times Square on New Year’s Eve. A fitting tribute to this Scottish-Canadian success story.

Known as ‘the world’s most famous sheep’, Dolly was born on July 5, 1996 at the Roslin Institute (University of Edinburgh). This was the first time a mammal had been cloned from an adult cell. Dolly lived to the age of seven and gave birth to six healthy lambs. She was named after singer Dolly Parton.