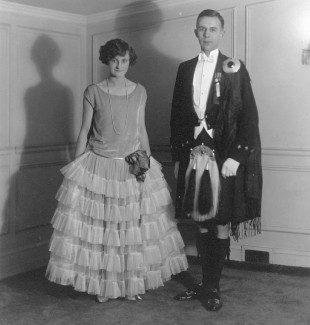 In 1843, a motion was placed before the members and carried, that “The Day” be celebrated by a “Ball and Supper.” This was repeated in 1844. This appears to be the first Ball 169 years ago! In 1857, because of the Indian Mutiny, it was resolved not to celebrate the Day at all. The Ball appears to have been an irregular function, dependent on the state of the economy and other factors. It was certainly a regular event through the ’20s, ’30s and ’40s (except probably for WW2). From the 1950′s until the late 1990′s the name of the ball alternated between the “The St.Andrew’s Ball” and the “48th Highlanders Ball”.  Since that time, the event has been jointly organized by the Society and the 48th Highlanders and the name simplified to “The St.Andrew’s Ball”.  The Ball is now called “The St Andrew’s Charity Ball”. The pageantry and camaraderie of the Ball makes it the preeminent Scottish social event in Canada.   The photograph is of the parents of one of our Past Presidents, John Catto, at a St. Andrew’s Ball in the early 1920′s.