The St. Andrew’s Society of Toronto was founded in 1836 to raise money for Scottish immigrants who had fallen on hard times. Canada would not become a country until 1867 which makes the Society older than our nation!

The modern Society has remained true to the benevolent goals of our founders. The organization continues to fundraise through donations and events that showcase Scottish-Canadian culture. These experiences range from curling socials to pub nights and formal affairs like the St. Andrew’s Charity Ball. Everyone is welcome to attend whether you were born in Scotland, have Scottish ancestors or you’re just looking to meet some great people!

A more detailed history of the Society appears below. After 186 years, we are proud to say that we are still going strong. New faces are always welcome on our membership roster and at our events. We hope to see you soon! 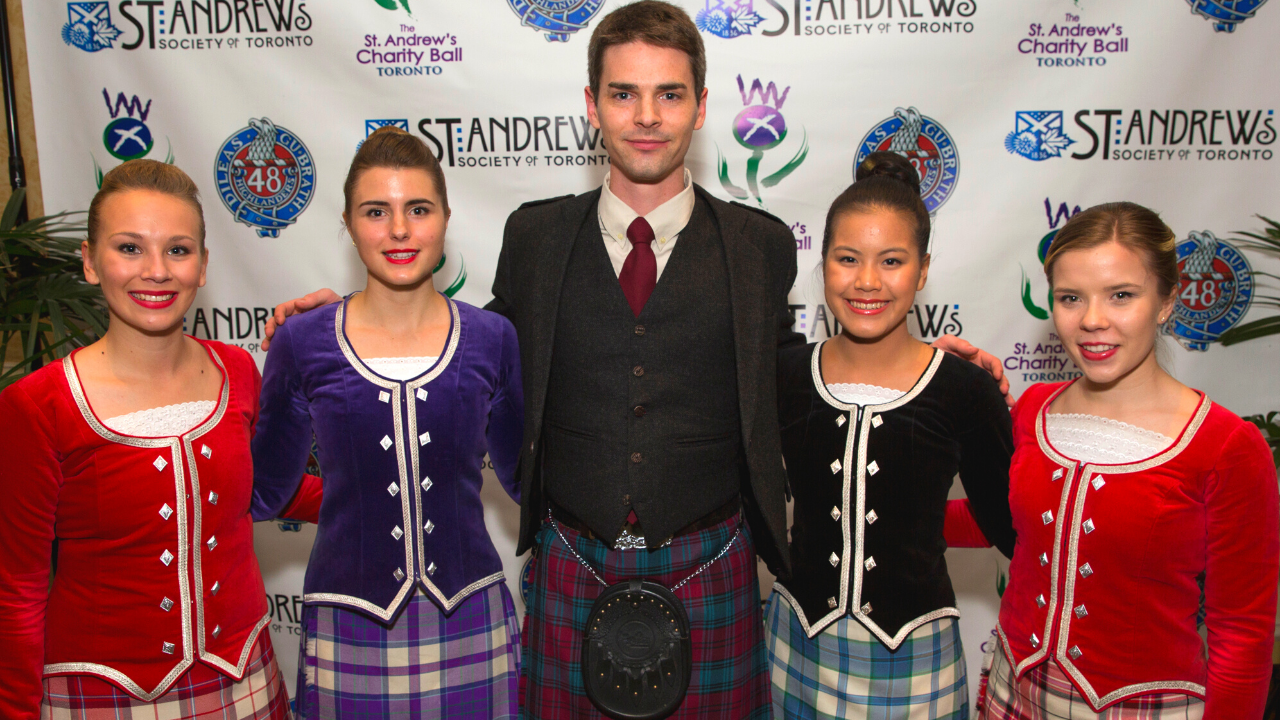 Scots have been leaving their homeland for many generations in search of adventure and economic opportunities. As a result, over 50 million people around the world have Scottish ancestry including 4.8 million Canadians. These numbers are especially remarkable when we consider that the current population of Scotland is only 5.5 million.

The Scottish diaspora made an impact wherever they went. From business and politics to science and the arts, the descendants of this small nation have always punched above their weight. This was especially true in Toronto where Scots were involved in every aspect of the city’s development.

A cultural society often followed whenever a number of Scots ended up in one place. Saint Andrew, as patron saint of Scotland, was a common symbol to rally around. By extension, St. Andrew’s Day (November 30) became the annual date to gather and dine on traditional fare. After the meal, which would almost always include haggis, there would be a series of toasts, songs and music. 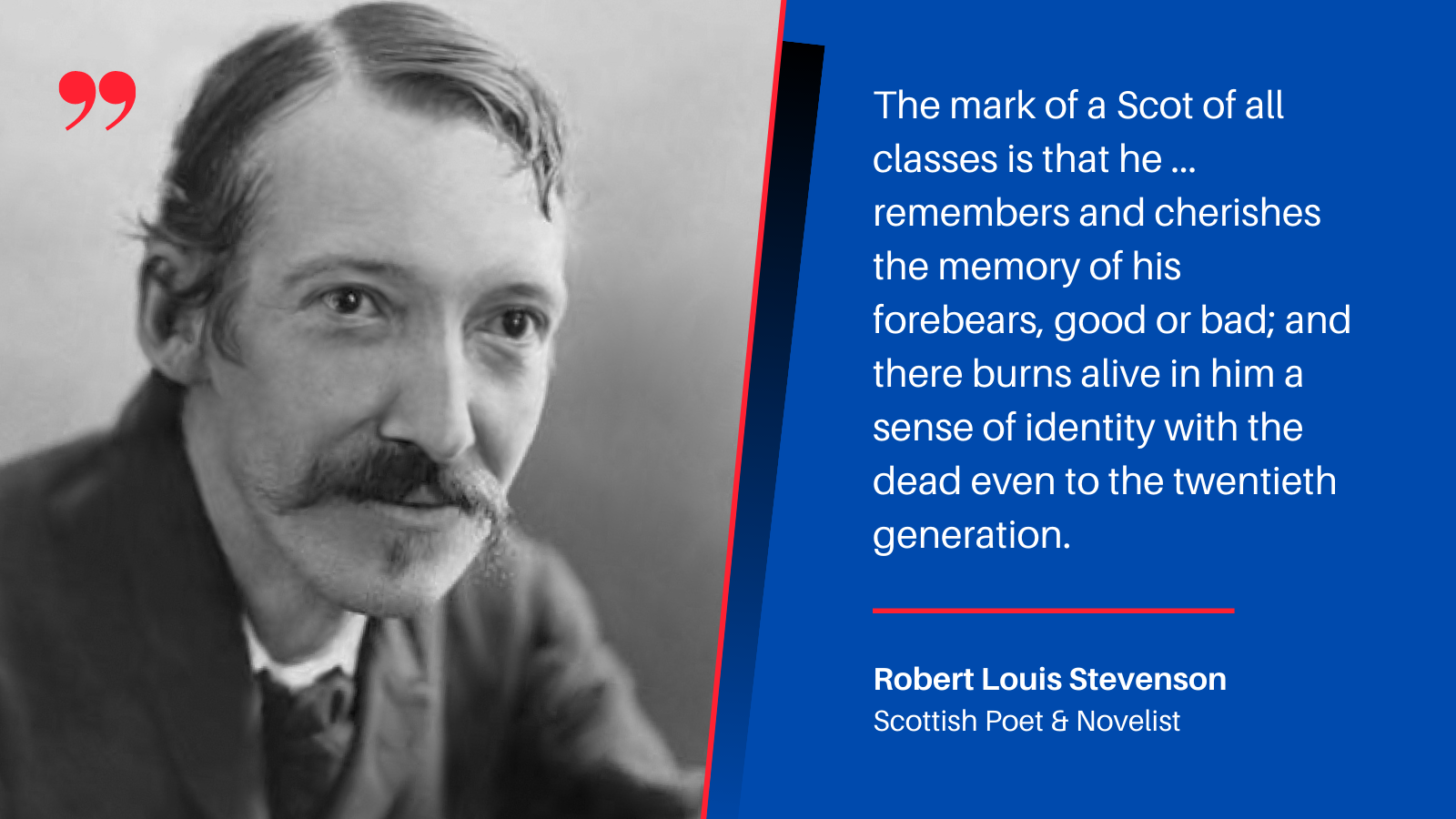 Founding of the Toronto Society

St. Andrew’s Societies have been set up in dozens of cities on six continents. Although these all operate independently, there are some informal connections among them. The first meeting of the St. Andrew’s Society of Toronto came in 1836. The emerging city of 10,000 people was growing quickly with a constant influx of new arrivals. It was a time of great promise as the name change from York had happened only two years earlier. While many immigrants found success in their new home, others failed to find their footing and became trapped in lives of despair.

Many of Toronto’s most prominent citizens at that time were of Scottish heritage. A number of them got together and agreed to form a committee to assist their compatriots who had fallen on hard times. It was agreed that the main focus would be on those who were newly arrived.

Officers were elected and managers assigned to assist those in need. They focused on finding their compatriots work, a place to live and making sure that families didn’t go hungry. Although many lives were improved, times were hard, and death lurked around every corner. Whether it was poverty, illness, or misfortune, many would never see the shores of Scotland again.

The Society purchased a large burial plot in Mount Pleasant Cemetery in November of 1886. The intent was that Scots who died in Toronto without resources would be buried in “a small piece of Scotland.” An official dedication came in 1891 along with a cairn. Society members in good standing can still apply to be buried at Mount Pleasant. 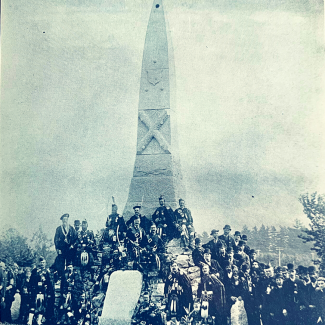 The Toronto Society’s first President was William Allan. Allan was a Scottish immigrant and a self-made man. He was born and raised on Moss Farm near the town of Huntly in Aberdeenshire. After immigrating to Montreal at the age of 17, he eventually settled in York.

Allan prospered as a merchant and government official. He was revered for his honesty and was named as the first President of the Bank of Upper Canada. By the time York became Toronto in 1834, Allan had amassed a fortune. He built the largest mansion the city had ever seen and named his estate Moss Park as a tribute to his childhood home. Although the estate no longer exists, Moss Park lives on through the many landmarks in that area that bear its name. 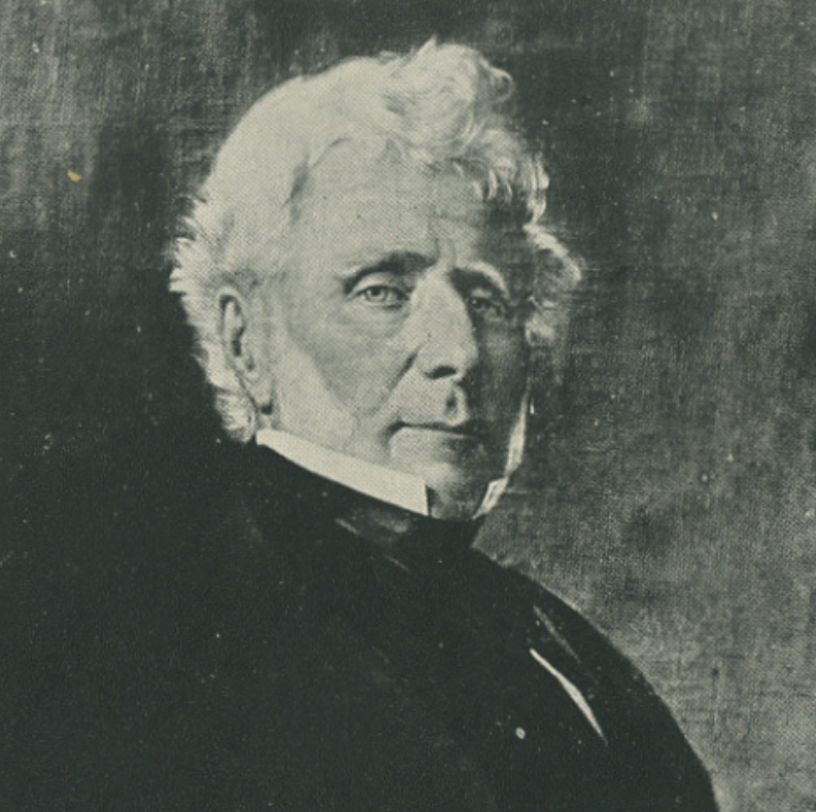 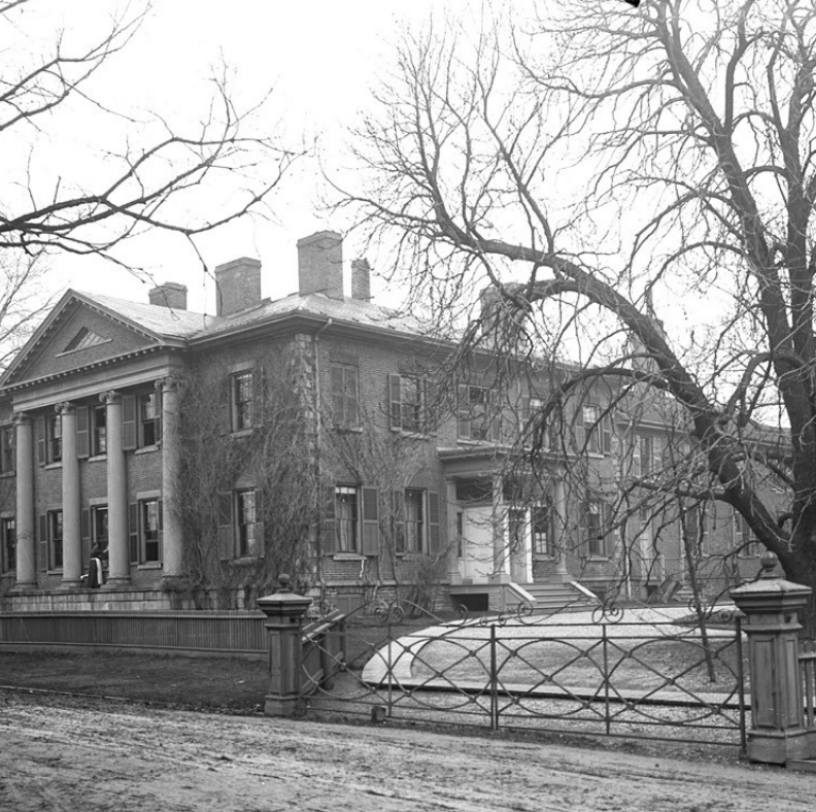 The Moss Park Armoury was built in 1965 to provide a home for several units of the Canadian Forces Primary Reserve. The land it sits on is very close to William Allan’s former estate. The 48th Highlanders are among the units stationed there.

The connection between The St. Andrew’s Society and the 48th dates back to the late 1800s. A group of local Scottish cultural organizations came together to raise funds and lobby the government to form the province’s first kilted regiment. Despite being rebuffed on their initial requests, the group persevered and achieved their goal.

The relationship between the Society and the 48th has remained close since the battalion’s inception in 1891. The two organizations have co-hosted the St. Andrew’s Charity Ball for decades with the regiment’s Pipes & Drums a focus of the evening’s entertainment. 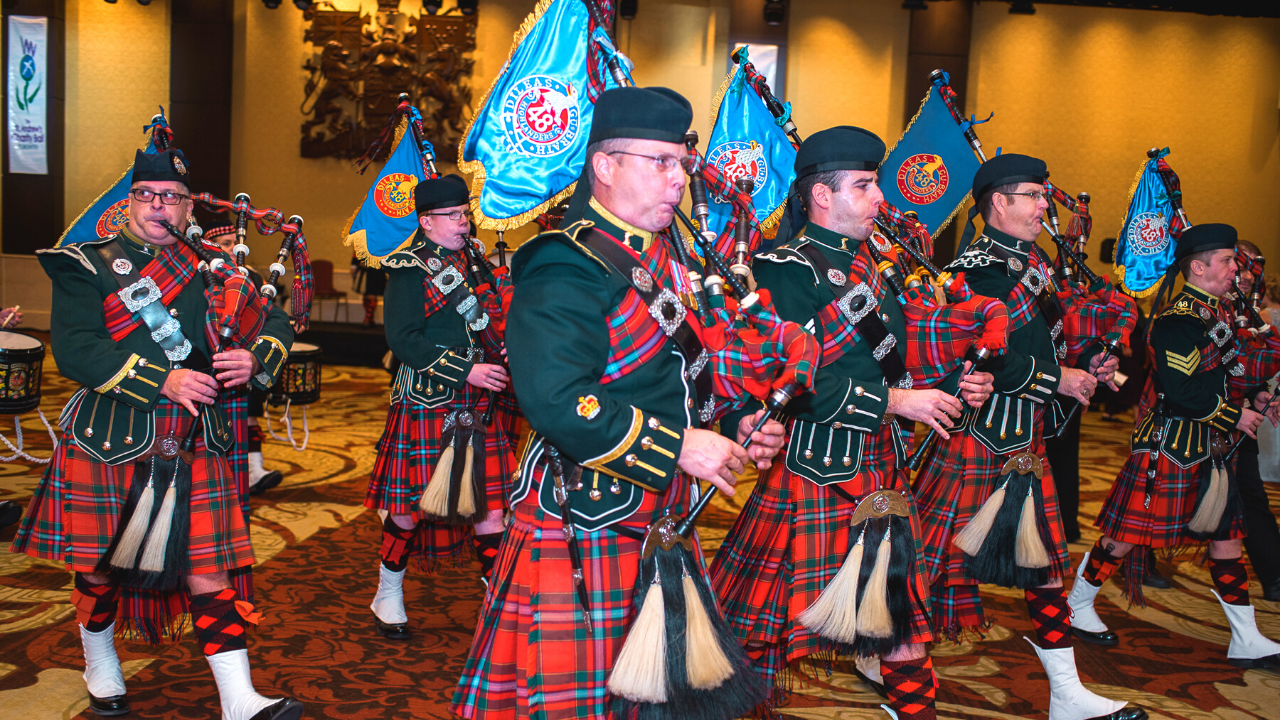 Many prominent Torontonians have been members of The St. Andrew’s Society. George Brown, one of the most famous Scottish-Canadians, served as President on two occasions. Brown was born in Scotland and came to Toronto after living in New York for several years. He became a prominent politician as an articulate champion for the province of Upper Canada (the future Ontario). Brown played a major role in securing national unity and was one of the Fathers of Confederation.

Brown was also the founder and editor of The Globe, one of the most influential newspapers of the time. The Globe was renowned for providing up-to-date and accurate information on world affairs in the era before Atlantic cable. Brown also used the paper to support his political agendas including strong support for anti-slavery movements in the United States, Great Britain and British colonies in North America. The Globe would eventually merge with The Mail & Empire in 1936 to form The Globe & Mail, Canada’s leading business newspaper.

Brown is still celebrated many years after his passing. Statues of him can be found at the Legislative Assembly of Ontario in Toronto (Queen’s Park) and on Parliament Hill in Ottawa. George Brown College, one of Canada’s largest post-secondary institutions, is named in his honour. 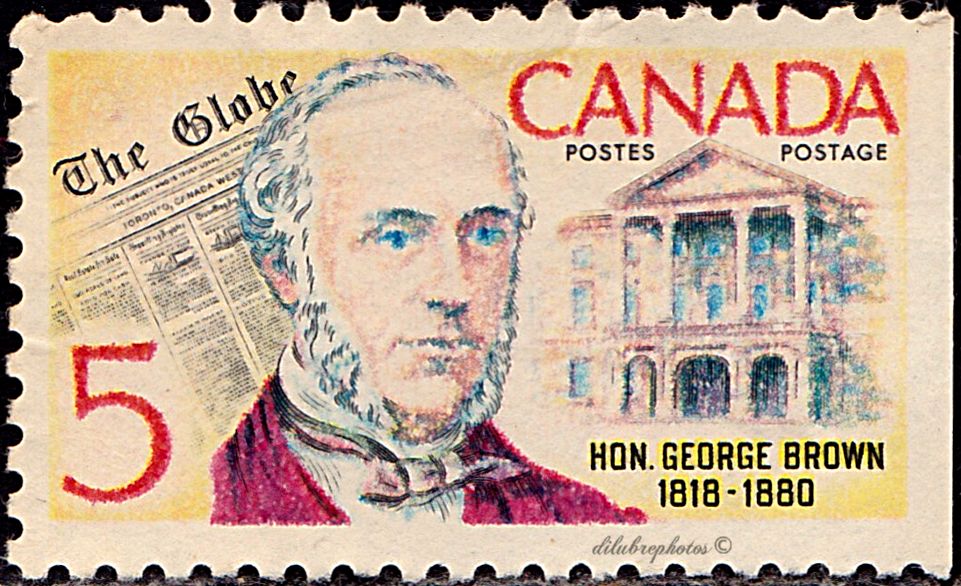 There are now two entities under the St. Andrew’s banner, the Society and the Charitable Foundation. The Foundation has maintained the benevolent spirit of our founders by delivering grants that focus on families in crisis, homelessness and food insecurity. Over $1 million has been donated to worthy causes in the past 15 years. The focus is on smaller charities that don’t always receive the exposure extended to larger organizations. The funds they receive are greatly appreciated and put to great use. Anyone wishing to make a tax free donation to the Foundation may do so here.

The Charitable Foundation has expanded its good works to help all those in need, regardless of country of origin. And although Scottish immigration has slowed from previous generations, the Society still extends the hand of friendship to newly arrived Scots. They are invited to events over the course of the year and introduced to great winter pastimes like skating and hockey. It is an honour to welcome those who will keep the bonds between our two great countries strong. If there is one thing that history has taught us, it’s that great things happen when Canada and Scotland come together! 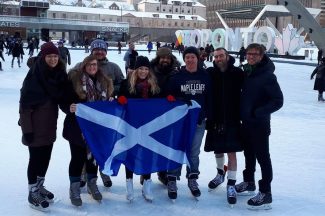 Canadians of Scottish heritage will continue to play a key role in the future of Toronto. According to the 2016 national census, 256,255 Torontonians claimed Scottish ancestry. This equated to roughly 9% of the city’s 2.7 million inhabitants. Among the city’s ethnic origin populations, only the Chinese (332,825), English (331,895) and Irish (262,965) registered larger numbers.

The connections to Scotland are dim for many in the Toronto area as their families have been here for generations. The Society encourages these people to remember where they came from and to learn about their heritage. Those who get involved can pay tribute to their ancestors throughout the year via Scottish music, fashion, cuisine, and sport. New faces are always welcome as members and at events. We hope to see you soon!

For those interested in a more detailed background of the society and its members, the book One Hundred Years History captures the organization’s first century. A more recent publication continues the story from 1936-2018: Our Second Century: A History of the St. Andrew’s Society of Toronto. 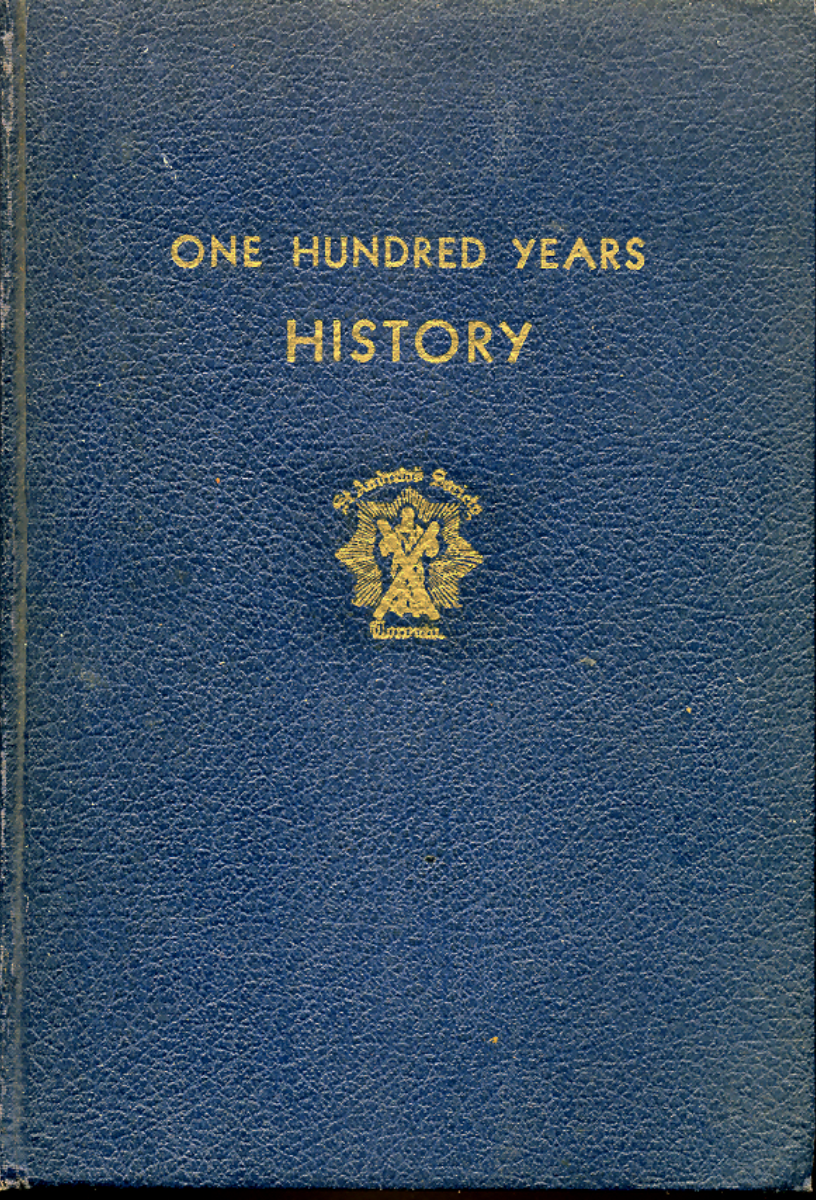 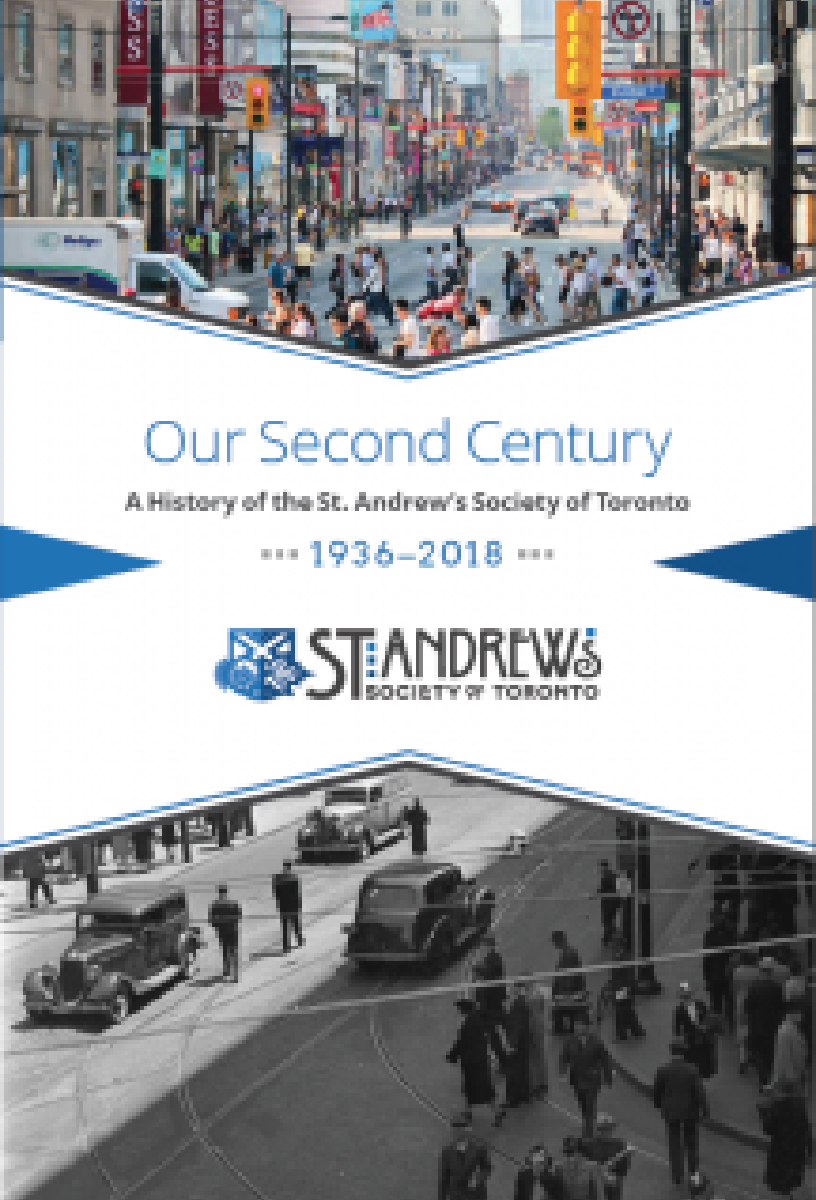