September 28th was established as British Home Child Day in 2011. It is a time to remember the 100,000+ orphans and children of poor families that were sent to Canada between 1869 and 1948.  Roughly 15,000 Scottish children arrived as part of this program of forced emigration and cheap labour.

It is estimated that in excess of 150,000 British children were sent to Commonwealth countries around the world between 1863 and the 1970s. Among this number were 100,000 children between the ages of six and 16 that were sent to Canada. It is estimated that 10% of Canadians are descended from these reluctant immigrants. Children were also sent to Australia, New Zealand, Rhodesia and South Africa.

British cities during this period were dealing with growing slums including large number of homeless children. This was largely a result of the influx of families to major industrial centres as people came looking for work. In a rural setting, if a family lost their breadwinner, other relatives were there to help and take care of those in need. But in the towns, where industrial accidents were common, mothers of large families were left without the means to support and feed their children. As a result, they were forced to give their children into care. Other children ended up on the streets when one or even both parents died of illness or turned to alcohol. 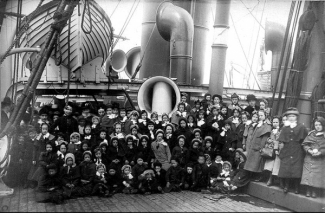 The original idea was to get children out of poverty by giving them a better life in other part of the Commonwealth. This also helped solve the separate issue of a worker shortage in places like rural Canada. Children were brought over by ship before being sent by train to various interim homes across the country. As a request came in for a child, a contract was signed for a term of indenture. The contract guaranteed that the child would be housed, fed, clothed and sent to school. At 18, the terms of indenture were to be discharged and the grown Home Child was given a sum of money (contributed annually by the family into a fund managed by the Institution) and was free to move on and find a job.

A very small number of the children in the program were orphans (2%). Most often, they were from poor families who had struggled to care for them.  Many of these families hoped to retrieve them once their financial situations improved. Often, they didn’t get the chance. The children were put in government-run charity homes from where they were transported out of the country.

The children were sometimes shipped abroad without the knowledge of their families. The younger ones were adopted while older boys became labourers and older girls became domestic servants. Some of the children were adopted by loving families and enjoyed good lives. Others were abused, over-worked and mentally scarred from being split from their original families. They were often stigmatized as undesirables and second-class citizens. Many siblings were separated and never saw each other again. 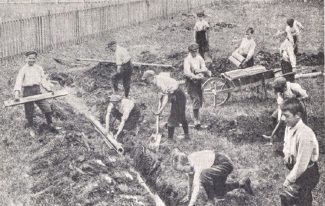 The organizations that coordinated the British Home Children programs often kept their young people in placements for set periods of time. Regularly moving from one family to the next meant there was little stability in their lives. The charities were supposed to check in on an ongoing basis to ensure the children were being cared for properly. In practice, this rarely happened and the children were frequently neglected or abused. Many lived wandering lives, moving from farm to farm, while some ran away from the mistreatment they suffered. Death among their number was not uncommon.

It is believed that 10,000 Home Children would volunteer to join the military during the First World War. For many, the opportunity to return home was a strong motivation to serve. They saw it as a chance to get back to Britain as Canadians fighting in Europe would be sent there for training. Once in the United Kingdom, they could then try to track down the families they had been forced to leave behind years before. Some British Home Children also saw military service simply as a chance to escape cruel or abusive families in Canada. Many underage boys even ran away from their placements and lied about their age in order to sign up. It is believed that 1,100 of these former Home Children were killed during WWI.

There was a great need for workers on Canadian farms in the early 1920s. Thousands of young men had been lost on the battlefields of the First World War. Even more came back with lasting injuries that made it hard to do the physical labour that farming required. The flow of British Home Children to Canada started again, although with some tighter regulations. After 1924, children under the age of 14 were not supposed to be sent to Canada.

The Prime Minister of the United Kingdom, Gordon Brown, officially apologized for the program on February 24, 2010.  In 2018, the British government agreed to pay compensation for Home Children shipped abroad between 1945 and 1970. At the time, approximately 2,000 people around the globe were eligible to receive £20,000.  This would be between $30k-$35k CAN depending on the exchange rate.

This history does not go unnoticed by the St. Andrew’s Society of Toronto.  The Society was established in 1836 to celebrate Scottish culture and to support Scottish immigrants who had fallen on hard times. The Society is still working to help those in distressed circumstances.

The story of the British Home Children is one of the inspirations behind the Society’s desire to support charities that keep children safe and families together. Several of our charities work with immigrants from all over the world. Please consider joining the Society or making a donation to our Charitable Foundation if you’d like to see this work continue. Together, we can accomplish great things.

The thistle is the national flower of Scotland. According to legend, a sleeping party of Scottish warriors were saved from ambush by an invading Norse army when one of the enemies stepped on the spiky plant. The Norseman’s painful cry roused the slumbering Scots who leapt into action and vanquished the invaders.