World Diabetes Day is recognized annually on November 14th. Today, we remember the three Canadians and a Scot who all contributed to the discovery of insulin. 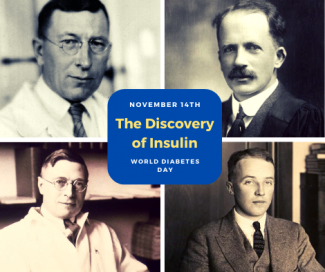 Clockwise from top left: Frederick Banting, John Macleod, Charles Best, J.B. Collip. Credit for the incredible achievement remains controversial to this day. The 1923 Nobel Prize in Physiology or Medicine was awarded jointly to Banting and Scotland’s Macleod for the discovery. Banting shared the honours and award money with his colleague, Charles Best. Years later, the official history of the Nobel Committee admitted that Best should have been awarded a share of the prize.
Macleod oversaw the lab at the University of Toronto where the majority of the research was conducted. In its deliberations for the 1923 Nobel Prize in Physiology or Medicine, the Nobel Committee of the Caroline Institute in Sweden concluded that Banting would not have found the way to insulin without the guidance of Macleod.
Macleod shared his half with J.B. Collip, a young biochemistry professor who was also on the research team. Collip developed an improved extraction process to remove toxic contaminants from Banting and Best’s work.
The discovery ranks with the greatest moments in the history of medicine. Diabetes is a chronic disease where the pancreas doesn’t produce enough insulin if any at all. Until the discovery of insulin, about all that people with diabetes could do to hold off their disease was eat less and less – postponing death from diabetes by literally starving themselves.
🡨     All Blog Posts

Chris Hoy is a retired track cyclist from Scotland. He was a world champion eleven times and one of the most decorated Olympic cyclists in history (six gold, one silver).