Tartan Day and the Declaration of Arbroath

Tartan Day was inspired by Scotland but originated in Canada. The idea can be traced back to a Federation of Scottish Clans meeting that took place in Nova Scotia in 1986. Attendees proposed a day to honour the contributions of Scottish immigrants and their descendants to Canadian society. The date was chosen to recognize the Declaration of Arbroath which was signed on April 6, 1320.

The Declaration was a diplomatic letter from Scots nobility to Pope John XXII. There are at least three things of historical significance in it worth noting. First, it outlined Scotland’s status as an independent nation that would use military action if attacked. The document rejected any claim on the country by the English with the letter’s most frequently quoted words speaking specifically to this. 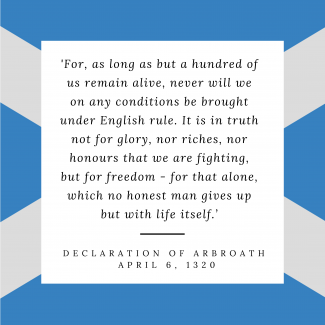 Second, the Declaration asked that Robert the Bruce be recognized as Scotland’s rightful king. The Pope had excommunicated The Bruce from the Catholic church for ignoring Papal decrees and for killing John Comyn, his rival for the Scottish throne, before the high altar of the Greyfriars Church in Dumfries.

The noble’s request had additional significance because of its description of a contractual monarchy. It set out that the king was chosen by the people and could be forcibly replaced if he did not uphold the freedom of the country. Prior to this, the king was regarded as bring appointed by God. 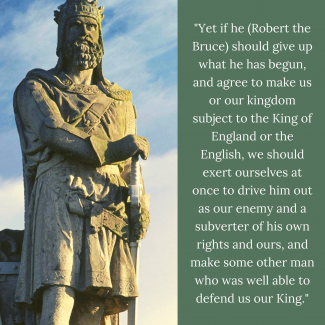 Third, and of obvious relevance to the Society, was that St. Andrew was confirmed as the patron saint of Scotland. Recognized as Jesus’ first disciple, Andrew never set foot in Scotland during his lifetime. His crucifixion on an X-shaped cross is the inspiration for the Scottish flag – The Saltire. 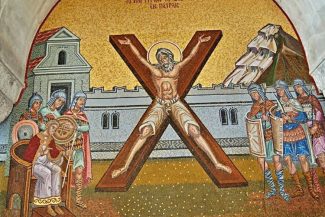 We hope to see many of you at our Tartan Day Pub Night on Saturday, April 9. We look forward to celebrating Scottish-Canadian culture and marking the 702th anniversary of The Declaration of Arbroath.

Saint Andrew never stepped foot in Scotland during his lifetime but was named the region’s patron saint in 1320. His crucifixion on an X-shaped cross inspired the Scottish flag, The Saltire.