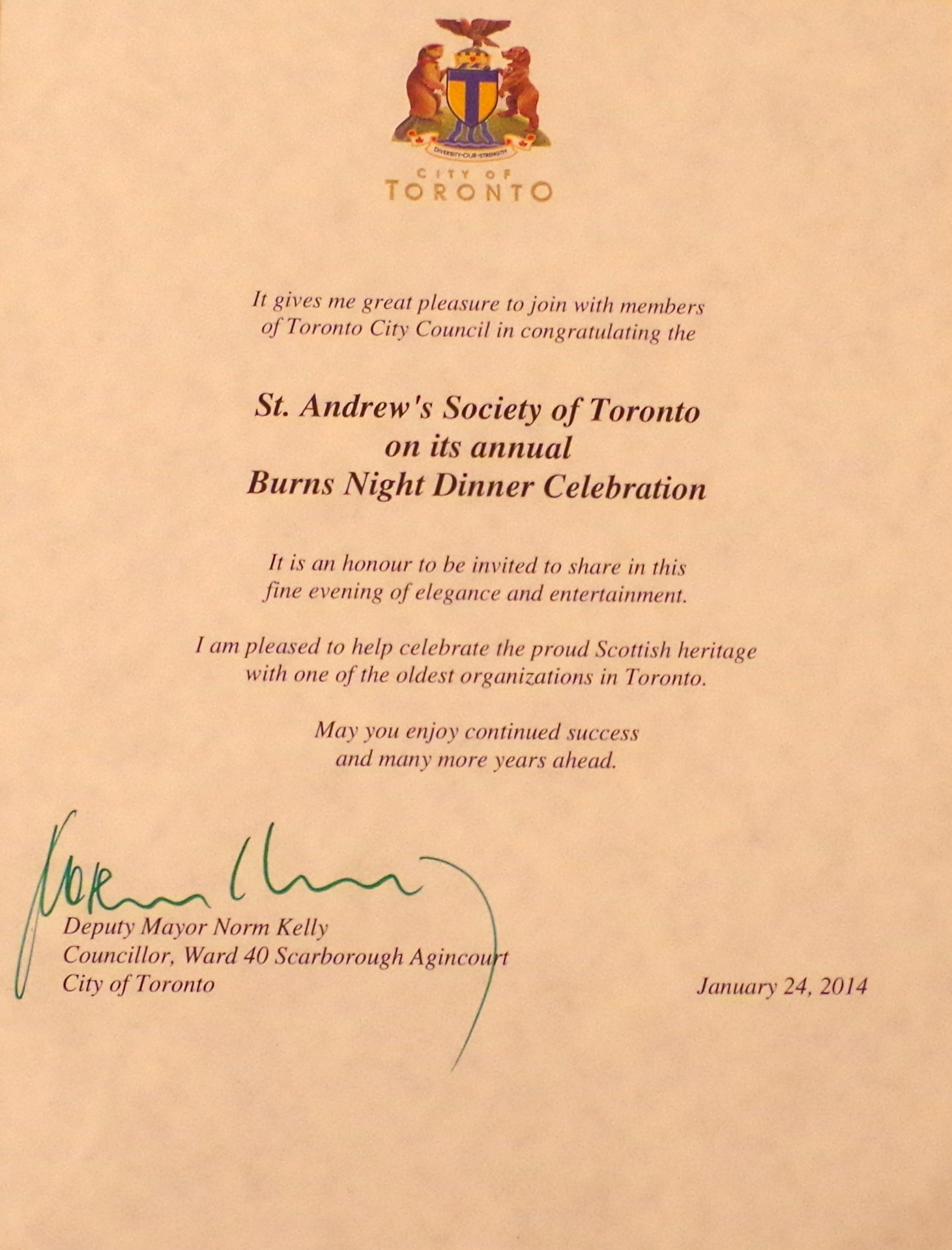 What are we up to?

In January 2020 we were pleased to make a donation of $5,000 to Houselink, a solution to homelessness. They currently house 500 people, including single adults, youth, seniors and families with children. Their combination of affordable housing and supports keeps over 95% of their residents housed, healthy, and connected year after year. 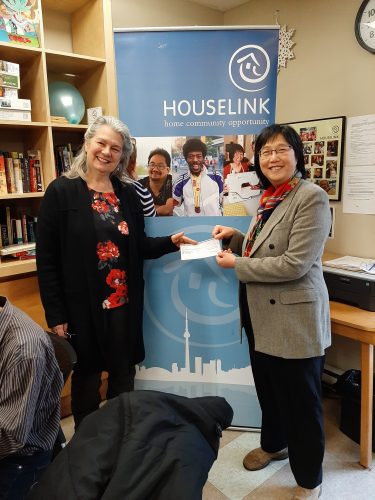 In May 2019 we were pleased to make a donation to Massey Centre’s New Lives Start Here, a transitional housing and education program for young moms.  In this programme, young moms are supported in pursuing post-secondary education or training while caring for their children.  Currently, the young mothers participating in the programme are registered in B of English at U of T, BSc at Ryerson, Early Childhood Education at George Brown College and Centennial College, B of Child Development at Seneca College, and Medical Esthetics at Marca College.  This year, a graduate from the programme was accepted into a Master of Education programme and another was accepted into a Master of Early Childhood Education programme. This demonstrates the success of the programme in supporting young women in building a foundation on which to support themselves and their children. 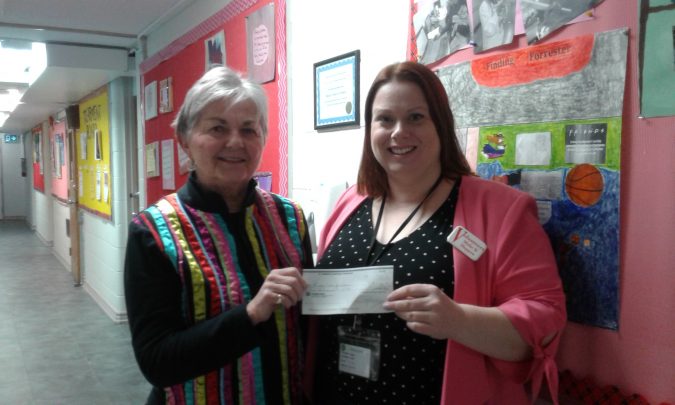 In March 2019 we were pleased to make a donation to Inspirations Studio, a ceramics-based program for marginalised women. Their core mission is to facilitate improvements in members’ lives through the making and selling of pottery. Through skill-building and creative practice, women gain a sense of self-confidence, dignity and stability, a connection with community, supplemental income, and a new way to engage with the world, as makers. 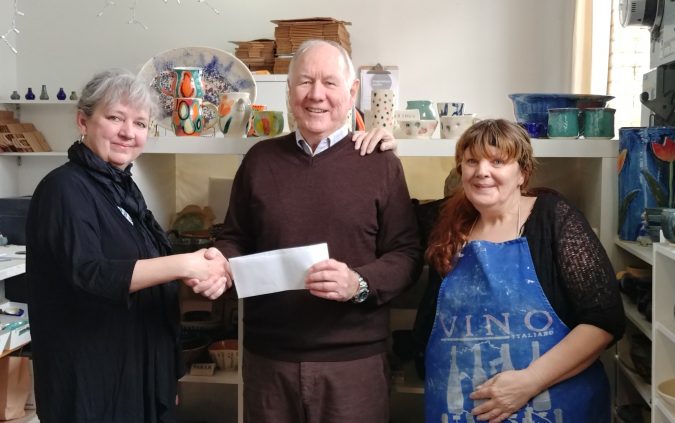 Tartan Day (April 6, 2019) was cause for a celebration and very fun mixer with plenty of entertainment at The Pint.

In January 2019 we made our first donation of the year to St. Clare Inn, a transitional home that offers accommodation and support to women between the ages of 30 and 60, who are homeless and struggling with mental health challenges. St. Clare Inn is a place where women can live with dignity while rebuilding their lives. Within this safe, drug and alcohol free environment where respect, peace, safety, and dignity are key values, women can begin to heal and start to build a better future. 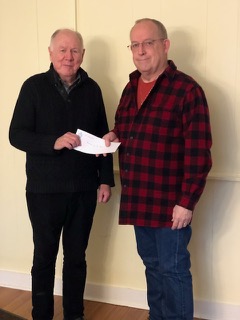 Want to learn more about the Society? A new book, published in 2018, continues the story of our history. Our Second Century: A History of the St. Andrew’s Society of Toronto, 1936–2018 is available at no charge for download or reading online. A printed copy is also available for $11, plus postage. 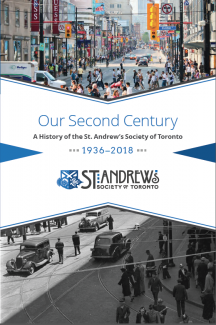 On January 27, 2019, a few dozen brave souls took to the ice at Nathan Phillips Square on Saturday despite some very cold temperatures. Many kilts were on display despite temperatures in the minus 20s. Hat tip to all the volunteers and participants who made this year’s Toronto Kilt Skate a success!

On January 25, 2019 we held our annual Burns Statue Celebration to honour the late, great, Robert Burns on his 260th birthday.

SAST members got together on January 12, 2019 at the High Park Club in Toronto to learn to curl. The event sold out in a week and we all had a blast!

On October 18, 2018, we were pleased to host a Social Mixer at Brazen Head Pub! The event was a success with many new faces showing up for comradarie with great food, drinks, and entertainment.

Grants Chair Keith Beveridge was pleased to present a cheque to JobStart in June 2018. JobStart empowers clients and employers to maximize their potential through participation in a variety of career and personal growth programs and services including free recruitment services for employers, job placement and coaching for job seekers, and customized workshops. 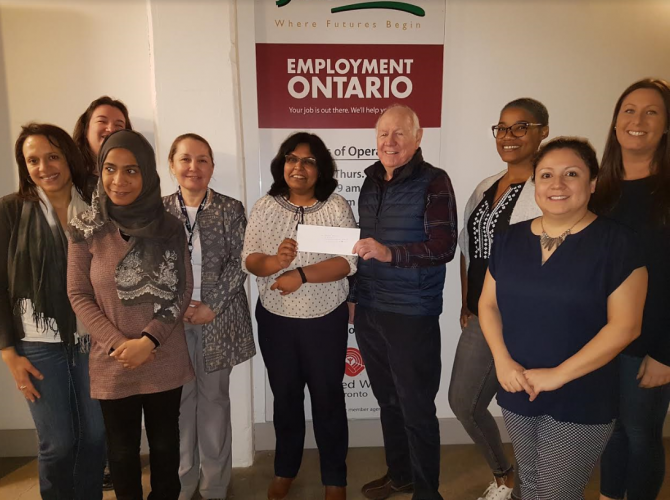 President Bill Sayers dropped off our cheque in May 2018 to Chris Hallett and Shabana Sohail of Community Matters Toronto. Bill spent some time with Chris and Shabana and learned about all the great work they are doing in St Jamestown and what is happening in that community. It was fascinating to hear of the work and how the new Canadians are settling onto Toronto and Canada. They are very appreciative or our support and it was a real privilege for him to take them their cheque. Read more about Community Matters Toronto by visiting their website. 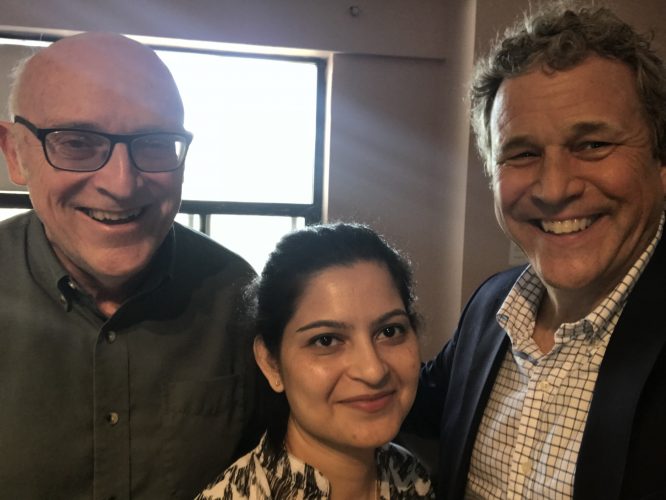 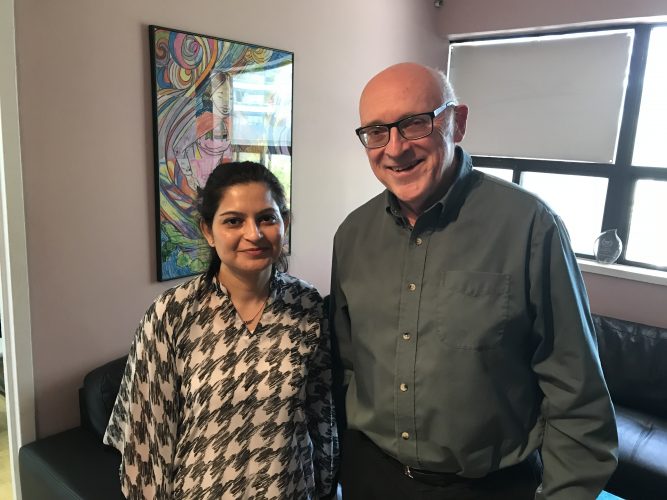 In May 2018, Grants Committee member Jeanette MacDonald was proud to present a $5,000 cheque to the staff of Dr. Jay Children’s Grief Centre, which provides compassionate care, support and education to grieving children, youth and their families while building strength, resilience and hope. 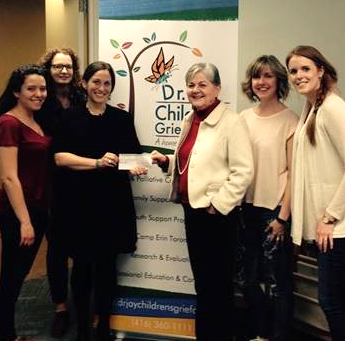 In April 2018, President Bill Sayers delivered our cheque to New Beginnings Support Program, which is a charitable agency that helps restructure the lives of low-income and underserved women. They have been instrumental in empowering women to become self-confident, career-oriented and employable. With their newfound confidence and practical knowledge and skills, women are able to walk away from poverty and despair, making a better life for themselves and their children. 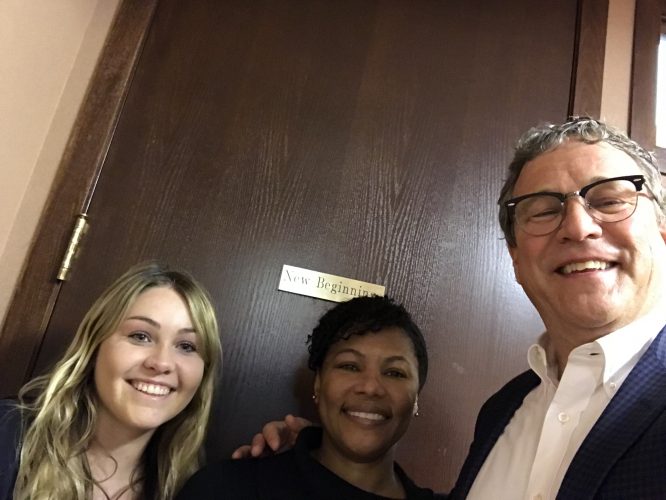 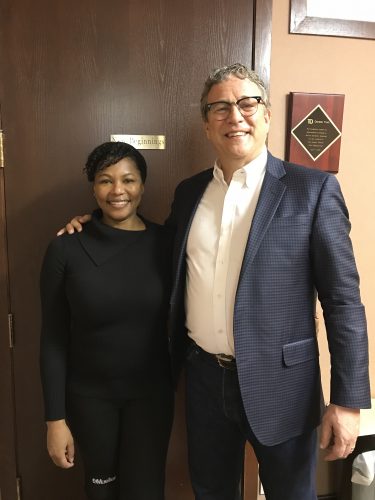 In April 2018 Pat Main of the Grants Committee had the honour of presenting a donation to Inner City OutReach. 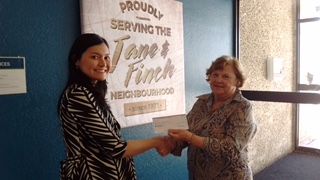 On January 12, 2018, Grants Committee Chair Keith Beveridge was delighted to present a cheque for $8,350 to Street Health! 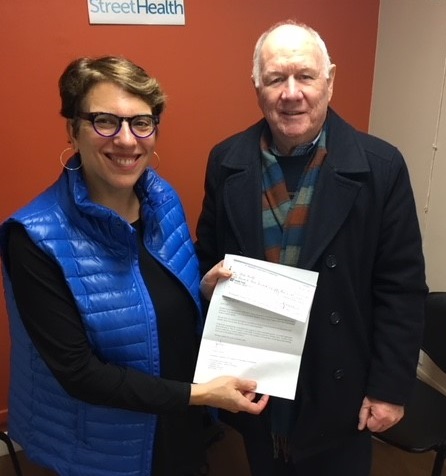 We were pleased to donate $5,000.00 to The Jean Tweed Centre, an incredible organization that provides a safe and supportive environment for women with substance use, mental health, and/or gambling issues. 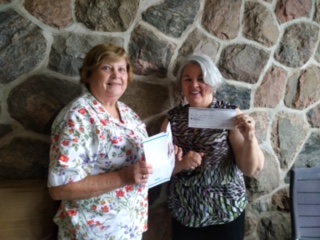 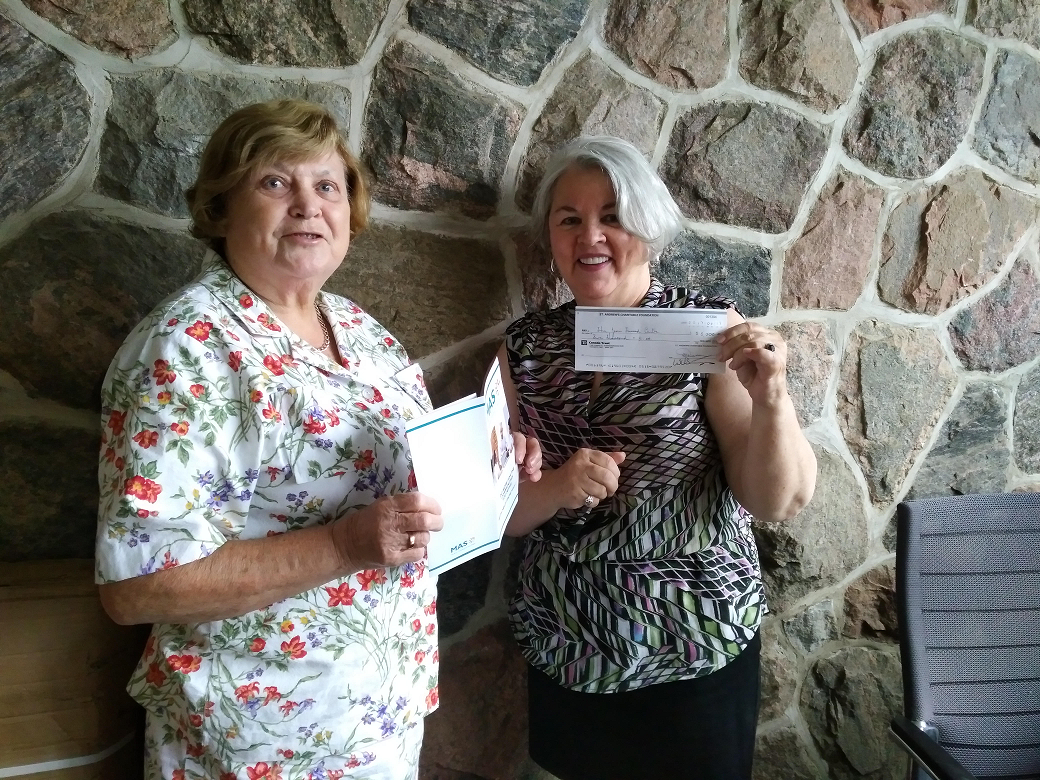 An exciting donation of $5,000.00 was made to ArtHeart Community Art Centre this summer. Your donations have helped hundreds of people connect and have a better quality life. 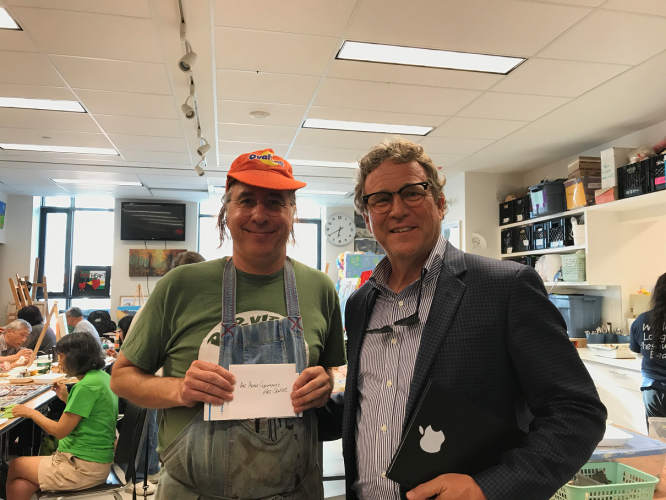 We were pleased to donate $5,000.00 to FCJ Refugee Centre again this year. Please check out their work– your donations go a long way for local organizations! 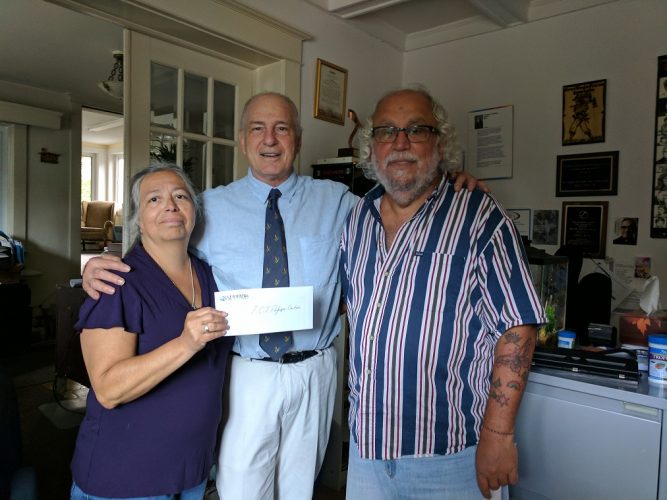 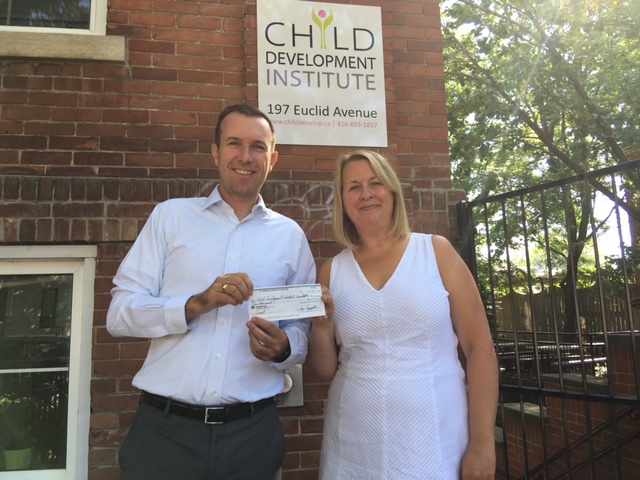 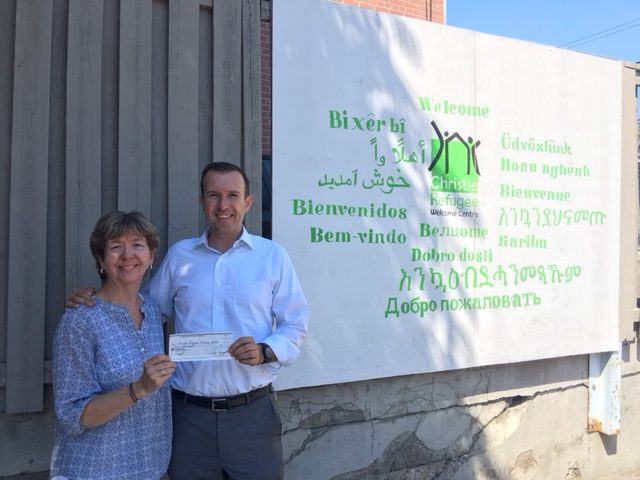 This summer we were pleased to present grants to these five well-deserving charities:

Interested in genealogy? Check out this FREE course, provided by the University of Strathclyde, Glasgow

In 1901, Scottish American millionaire Andrew Carnegie created the Carnegie Trust for the Universities of Scotland to help the “deserving and qualified youth of that country” to attend university.

The main source of student funding until the introduction of government grants, the Trust has played an important role in increasing social mobility and educational attainment in Scotland.

The original index cards showing the name of recipients, course details and the amount awards have been scanned and the Carnegie Trust team will happily dig into its records on behalf of former recipients or their descendants curious to know more about the support given to them. They also welcome information about our beneficiaries, summarizing their achievements and life stories.

To learn more about our archive and request a search, click here.

Were you, or a relative of yours, a recipient of a Carnegie Scholarship to attend St. Andrew’s University in Scotland? If so you may be interested in this interesting announcement.

Our own Doug Gibson wants to let you know about an opportunity to proclaim our proud Canadian connection with St Andrew’s, by raising funds to support and name THE CANADA ROOM as part of the major redevelopment of the Students’ Association building.

Included in the redevelopment are two purpose-built rehearsal rooms which offer students high-quality, adaptable spaces within which to hone their skills. With a new 132-seat theatre for the Union, and with the recent acquisition of the Byre Theatre, the University is investing in improved facilities for students to showcase the fruits of those rehearsals.

Along with a keen group of St Andrews alumni, parents and friends, he has taken on the task of raising $40,000 (CND) to name one of these rehearsal rooms as THE CANADA ROOM.

If you would like to join us in this endeavour, you can do so by simply clicking here and following the prompts to donate online. St Andrews is a ‘prescribed university outside Canada’ which means tax credits apply for Canadian donors and the University will supply tax receipts in the approved format.

Click here to read Doug’s full letter regarding this endeavor.

Out annual Fall Meeting, which was held on October 15, 2015, was a wonderful evening.

Our special speaker for the evening was Former SAST President Douglas Gibson, who spoke on his adventures as one of Canada’s foremost literary editors and agents based on his first book, Stories About Storytellers.

We were pleased to present a cheque for $3,000 to Dixon Hall at the meeting, with more information about the organization below.

Our own Ian McHaffie was presented with a Ships Decanter, as a token of appreciation for his long service to editing and producing our newsletter.

Be sure to check out the photos of the meeting here!

Douglas Gibson emigrated to Canada in 1967  and started as Junior editor at Doubleday (publishing).
In 1974 he became editorial director of Macmillan of Canada, ascending to publisher of the company in 1979.  At MacMillan he pursued and won over Mavis Gallant – a literary treasure if there ever was one –  and he has gone from strength to strength ever since. Other writers he brought to MacMillan include: Robertson Davies, Bruce Hutchison, Jack Hodgins, Alice Munro and Morley Callaghan.

Douglas moved to McClelland and Stewart in 1986, where many of the writers followed him. He became the publisher of the company in 1988 and the president in 2000.

Check out the Globe & Mail article about Douglas and his books here.

Dixon Hall Neighbourhood Services is a multi-service agency located in the heart of east downtown Toronto.

For more than 85 years, Dixon Hall has offered a wide variety of supportive programs & services to a diverse range of community members living in downtown east Toronto, including Regent Park, Moss Park, Cabbagetown, St. James Town and surrounding neighbourhoods, as well as to homeless men and women and people searching for employment from across the city.

Great news for travelers! Air Canada Rouge will start to have non-stop flights to Glasgow beginning June 13 2016 until September 25 2016. They will fly three times a week on Mondays, Wednesdays, and Saturdays!

The St. Andrew’s Society of Ottawa has released their January 2016 newsletter. You can read it here. 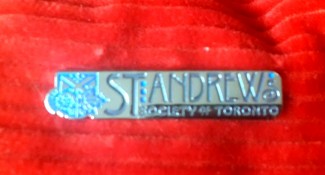 The 2015 Annual General Meeting was a success with plenty attendees! We presented our contribution to Community Matters Toronto for their revitalization project in St. James Town, Toronto, which includes a garden and upgrade to sports facilities. Check out the gallery for photos from the AGM!

Click on the images for the full sized pdf file: 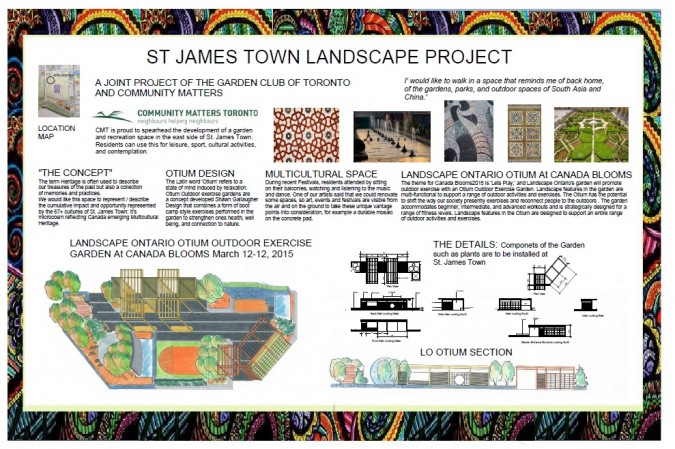 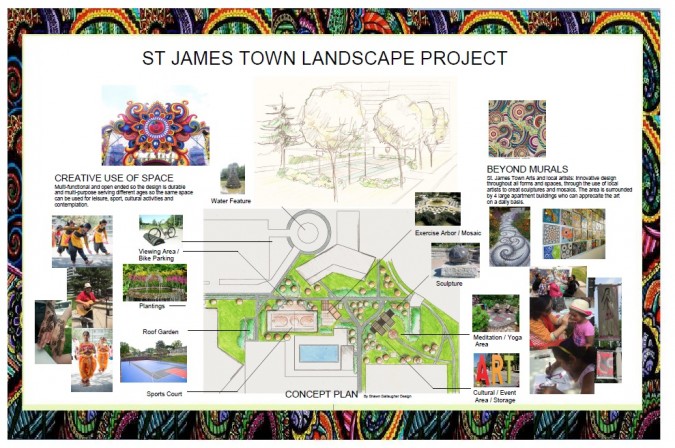 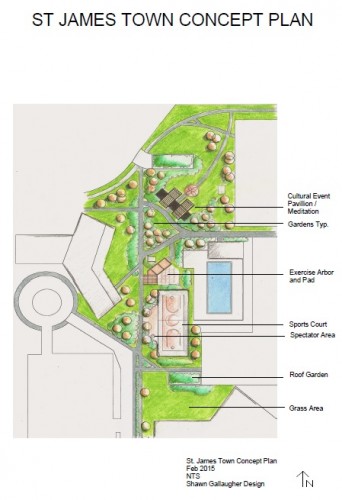 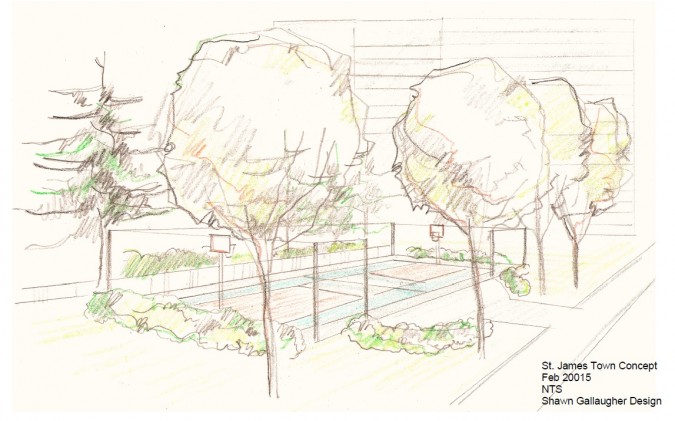 2015 Burns Dinner
The event at the University of Toronto Club was a sell-out, with more 125 in attendance.
The Master of Ceremonies for the evening was Past President Graham Desson, who delivered the Address to a Haggis, which was piped in by Cpl. Michael Brown.
The Toast to the Lassies was given by Ken McGoogan, and Sheena Fraser McGoogan responded with the Toast to the Laddies.
The Toast to the Immortal Memory was given by Linden MacIntyre.
After dinner entertainment of Burns songs was provided by Peter McCutcheon, accompanied by  Bruce Nasmith.
President Anne Moir received greetings from Lawrence Prout of the St. Andrew’s Society of Winnipeg, who presented a book Contemporary Music for the Highland BagpIpe written by Nathan Mitchell of Winnipeg.

Reminder: The change in membership year-end is now August 31st.

Saint Andrew never stepped foot in Scotland during his lifetime but was named the region’s patron saint in 1320. His crucifixion on an X-shaped cross inspired the Scottish flag, The Saltire.